The Joules Journal / How To Wear a Gilet

How To Wear a Gilet 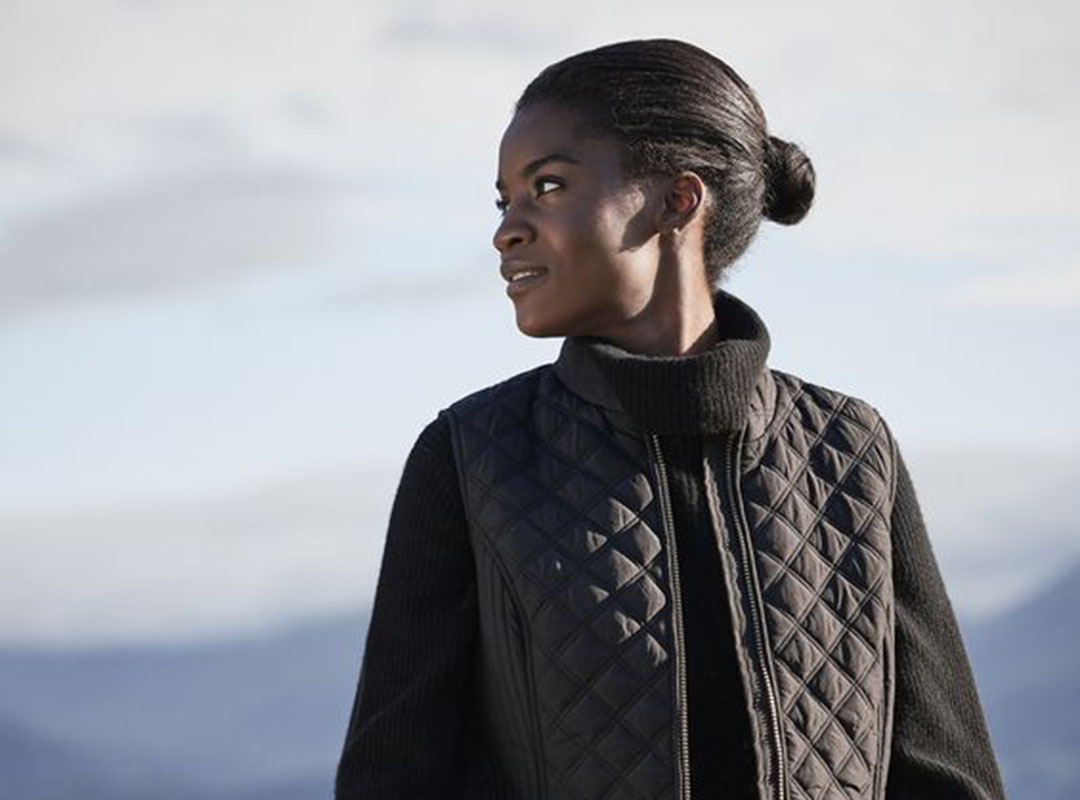 That lightweight jacket you desperately want to wear is perilously thin and flimsy, so you’ll almost certainly get soaked through if it rains and quite likely freeze to death too. The problem is, that cosy winter overcoat you probably should wear, feels way too hot and bulky.

Enter the sartorial lifesaver aptly known as a ‘body warmer’ or gilet. Whether you go for quilted, padded, short or longline gilets, they are the essential turn-to outerwear piece to weather all manner of storms and keep you warm (just not too warm).

It’s the fabulously functional extra layer you can add on or peel away at whim; perfect for awkward in-between-season times when the weather doesn’t know whether it’s coming or going. Conveniently compact enough to roll up and pack into a bag, a gilet makes an ideal travelling companion too.

The problem is, such a versatile piece of clothing brings with it a multitude of options to dress it with. If the thought of deciding what to wear with a gilet is filling you with dread, fear not, the fashion gurus at Joules have all the answers.
We are a firm believer that our fabulous range of ladies’ gilets and men’s gilets are an essential addition to your coat cupboard this winter. Not forgetting our gilets for little ones which are so breathable and lightweight, they’re perfect for fooling around and having fun! Read on to discover the wonders of the trusty gilet.

What is a gilet?

A gilet, also known as a bodywarmer, is a sleeveless jacket worn over an outfit to add an extra layer of warmth. Gilets are typically straight-sided (not fitted) and come in an array of styles and lengths such as waist and knee length.

What to Wear Under a Gilet

You can pair your gilet with a range of clothing, whether winter jumpers and sweatshirts or a sleek and stylish shirt dress or lightweight, long-sleeved top all depending on the situation that arises. Because of its versatility, you can wear almost anything under a gilet.

If you’re wondering what to wear with a gilet for casual and formal styles, you’ve come to the right place.

HOW TO STYLE A GILET: FOR MEN

For casual wear for men, pair a stylish padded gilet with a classic crew neck jumper and for smart casual, layer your men’s gilet with a bold checked shirt. The crew neck jumper will provide you with enough warmth to stand the brisk autumnal and winter air and has enough flexibility to deal with even the more arduous playfights or hikes. The bold checked shirt has exciting and colourful prints that will work perfectly with the solid colour of a men’s body warmer and are ideal for a semi-formal occasion like a christening or a birthday party with friends.

Throw a pair of Chelsea boots into the mix and you’ve got an outfit that’s sure to not only keep you nice and snug, but will be the envy of everyone down at the local pub. 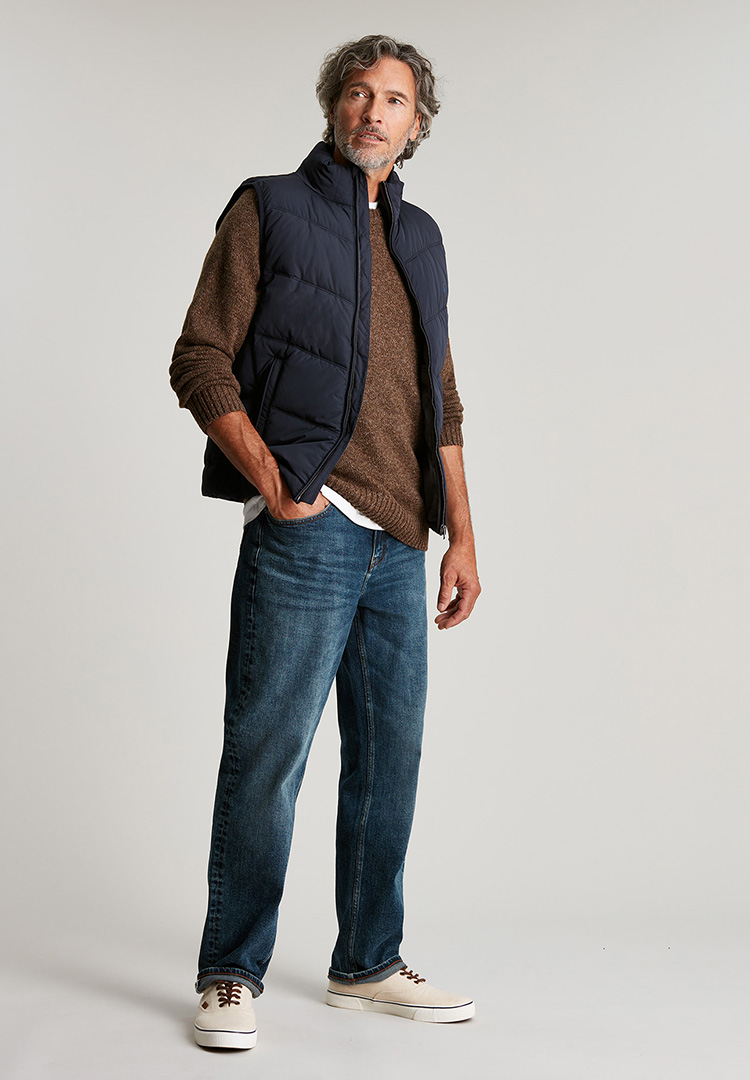 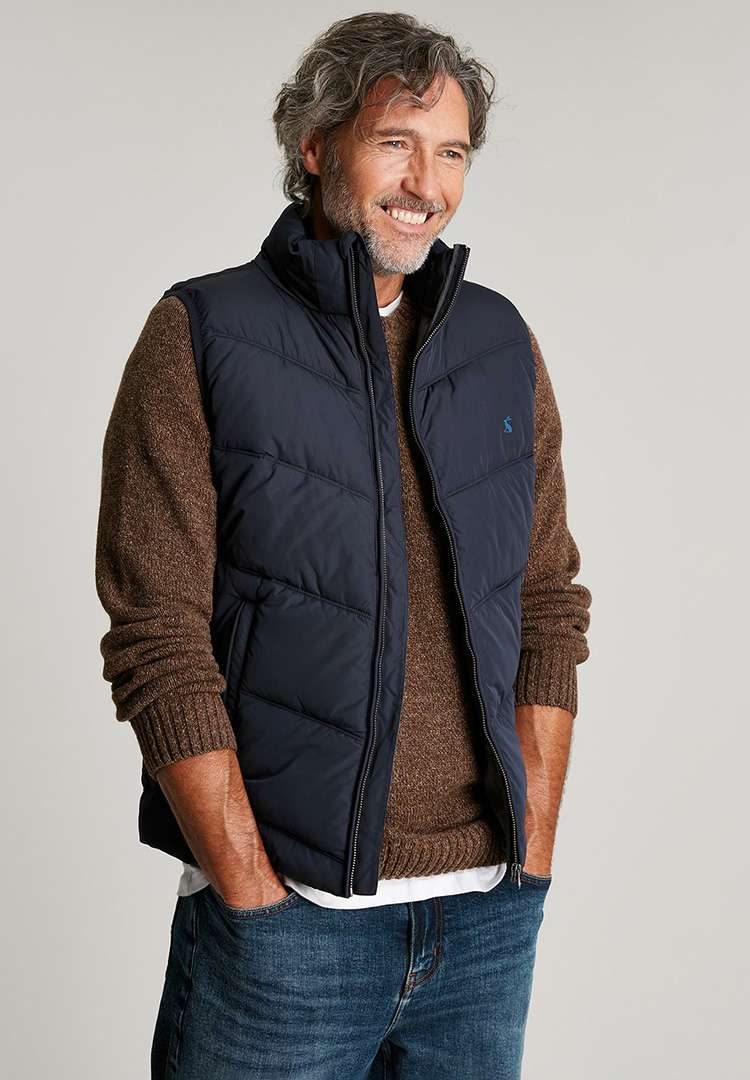 Men’s gilets can be coupled with your workwear quite easily. Choose the Oxford shirt or a more contemporary slim-fit shirt and a gilet will keep you warm on the way to work without reducing the formality of your outfit. 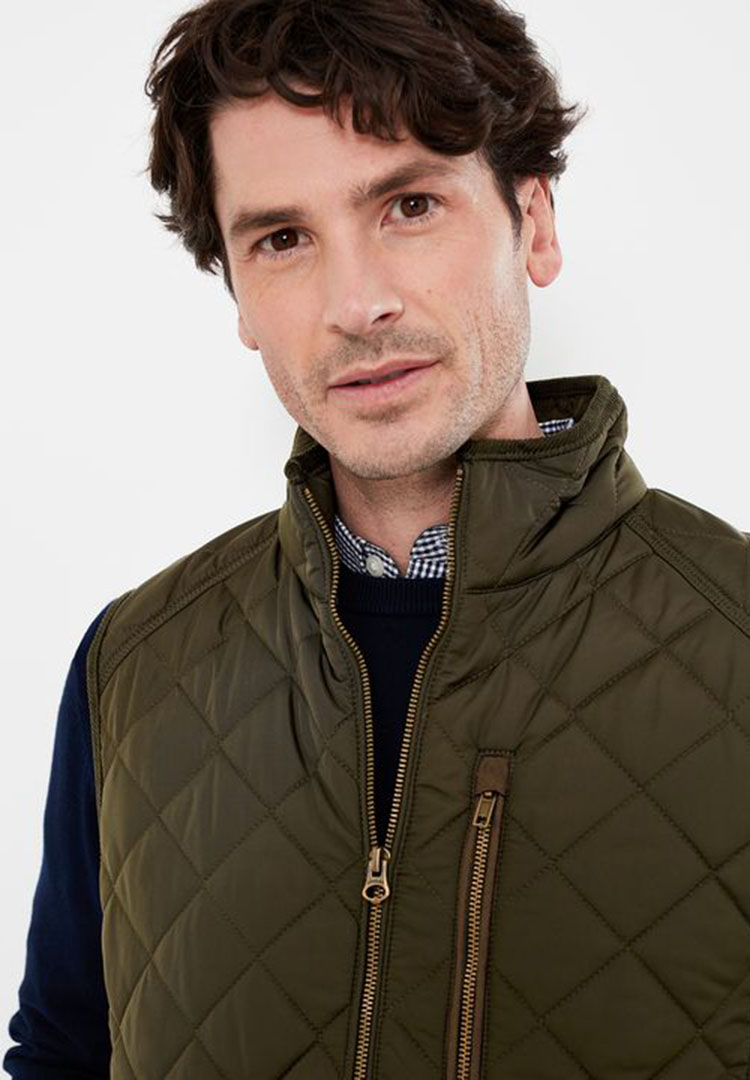 HOW TO STYLE A GILET: FOR WOMEN

For casual gilet styling for women, pair your women’s body warmer with a striped sweatshirt. A fur-trimmed ladies’ hooded gilet is perfect for not only keeping you warm and cosy, but for adding a touch of luxury to the relatively simple design of a body warmer.

If you’re planning on a walk through the countryside with family, then your gilet will look fabulous alongside that British classic: the ladies’ wellington boot, whether you opt for a bold, unique print, or an understated pair of plain blue wellies. 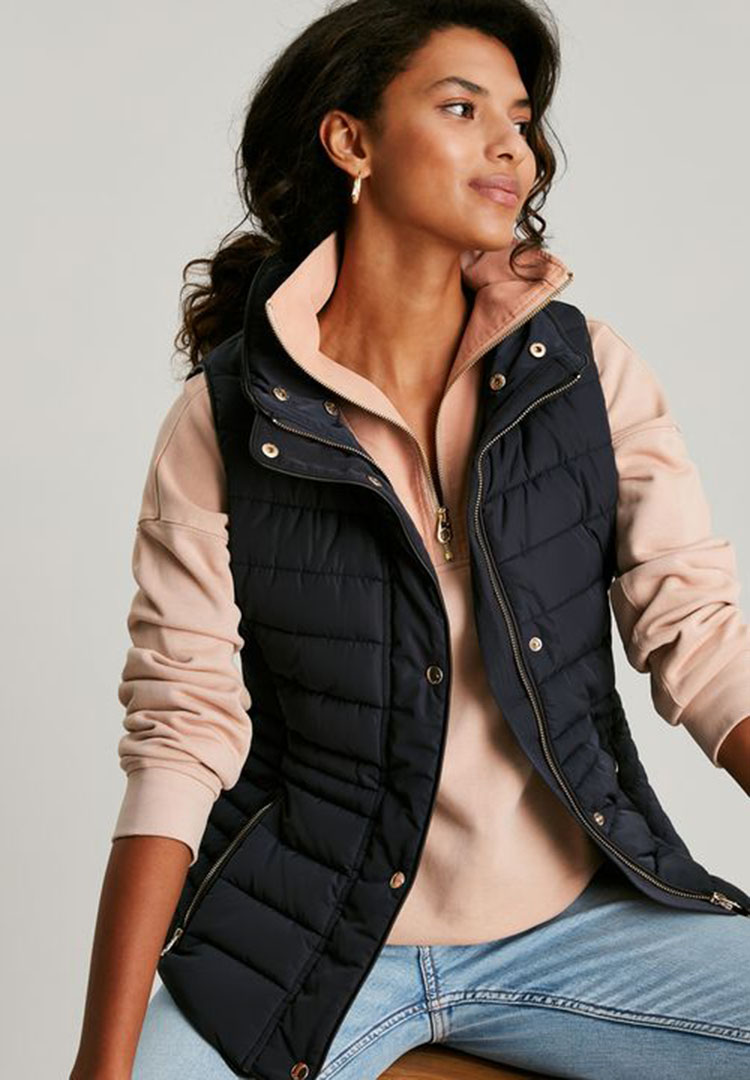 For more formal women’s body warmer styling, try pairing with a classic knitted jumper in a complementary tone over a crisp cotton shirt. Our collection of women’s padded gilets are a classic and contemporary look, not only making you look the part but also feel the part! A leather Chelsea Boot will complement the look perfectly, taking a more fashion-forward adaptation of traditional country style, and mid-calf wellies offer both style and protection on those muddy woodland walks. 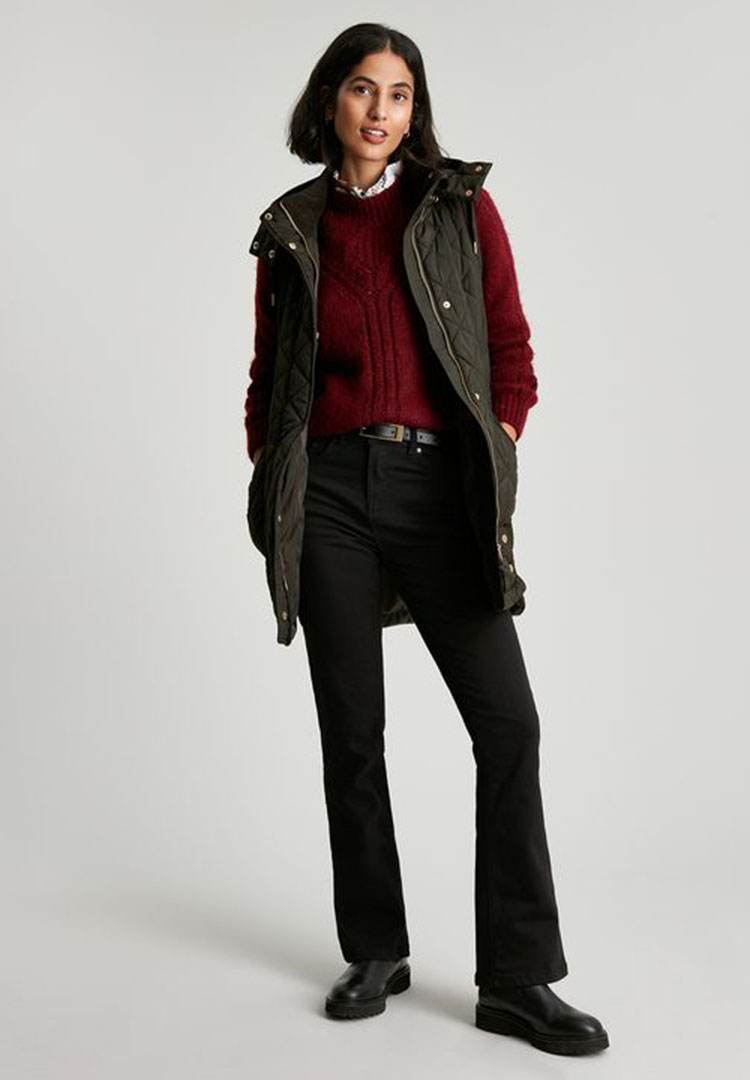 Children’s gilets are perfect to be worn with jeans and a simple t-shirt or a jumper if you’re planning on a brisk walk, they’re both stylish and hardwearing.

Gilets for the little ones are adorable. Our boy’s bodywarmers and girls’ gilets are ideal for keeping your little one warm and cosy as we press on into the colder months. 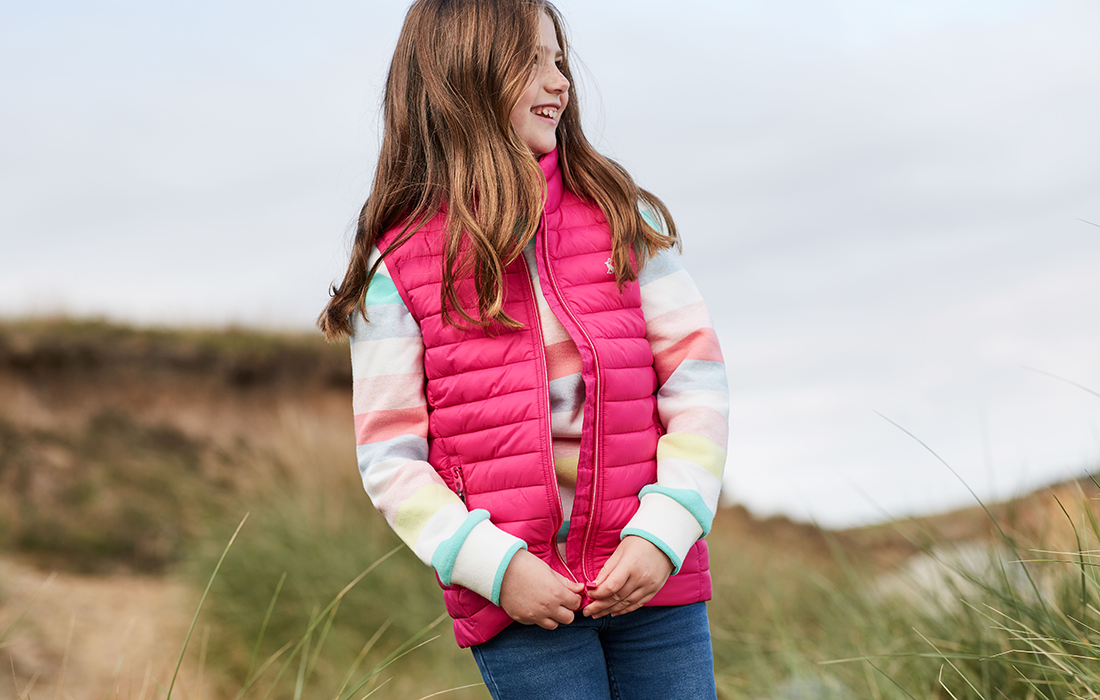 How Should a Gilet Fit

A gilet should ideally fit a gentleman in a similar manner to the waistcoat. The arm holes should be high, and the garment should fit snugly around the body to ensure it can sit nicely underneath a winter jacket. For ladies’ gilets, the same is true. Ensure the fit is comfortable and snug but with enough room to layer correctly.

Overall, the fit is down to personal preference, but whether you wish to wear a knitted jumper or a jersey dress underneath your gilet, there should be enough room to guarantee either would fit without restriction. 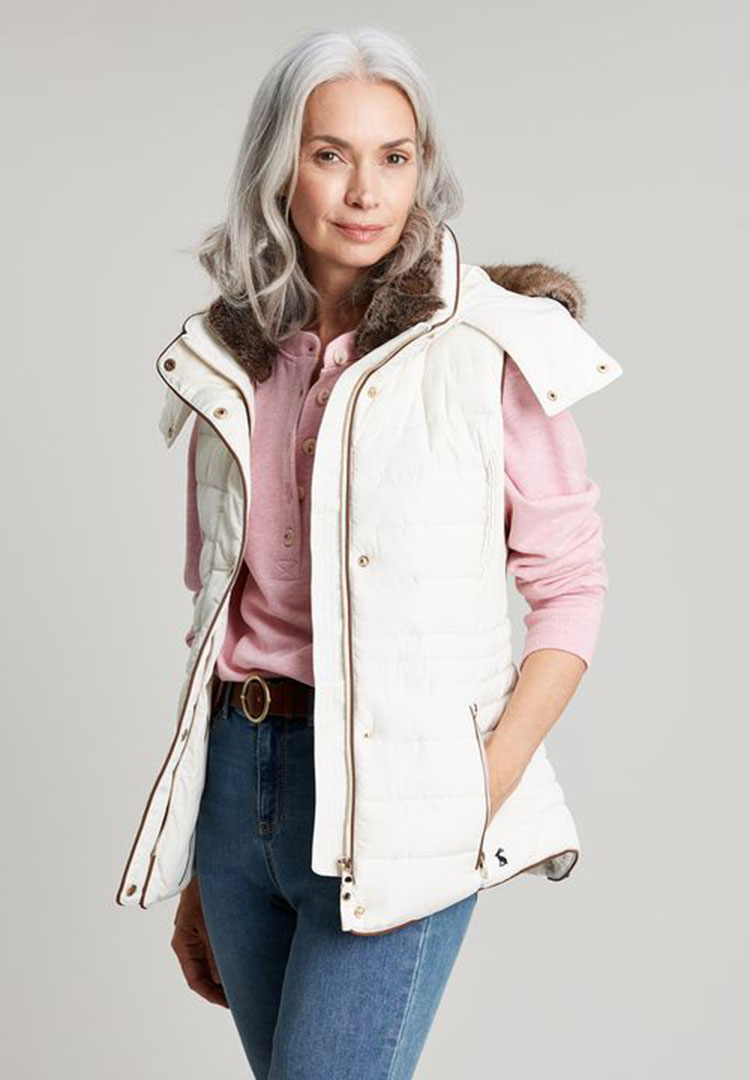 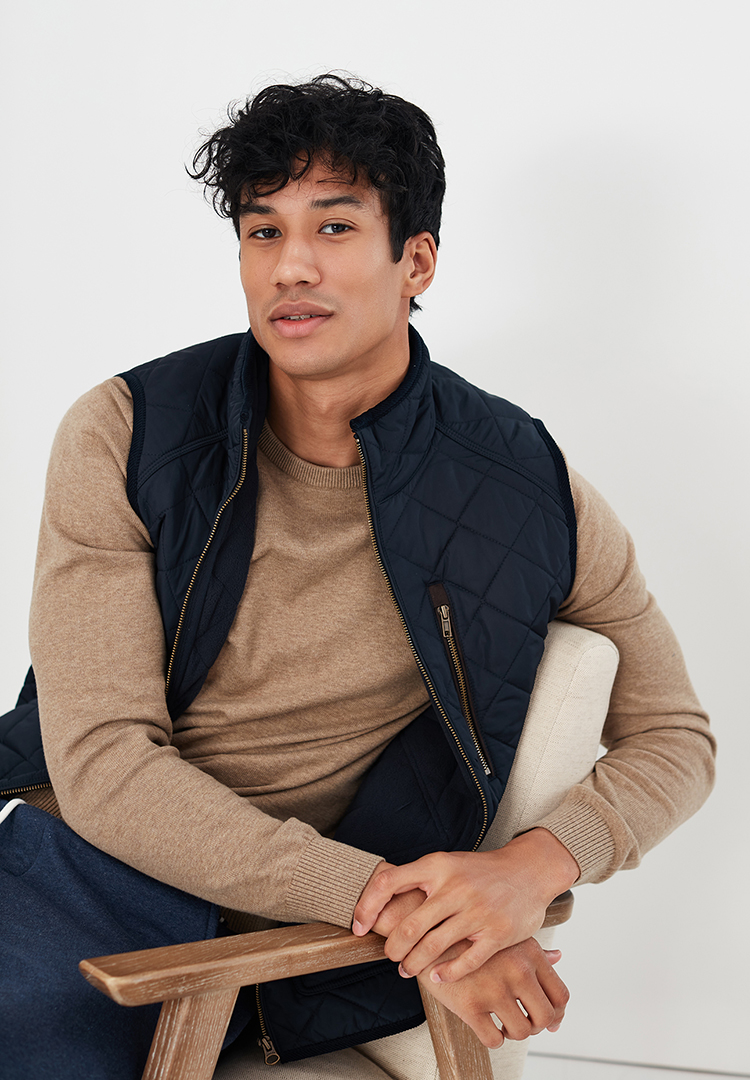 How to Wash a Gilet

Gilets can be machine washed with a normal detergent to ensure any unsightly marks are removed from the material. It’s always best to consult the label on the inside of your garment before washing for the first time however.

This is because different materials will need different levels of care and since body warmers can be crafted in an array of fabrics, this is the only way to confidently know what washing cycle and temperature is suitable. 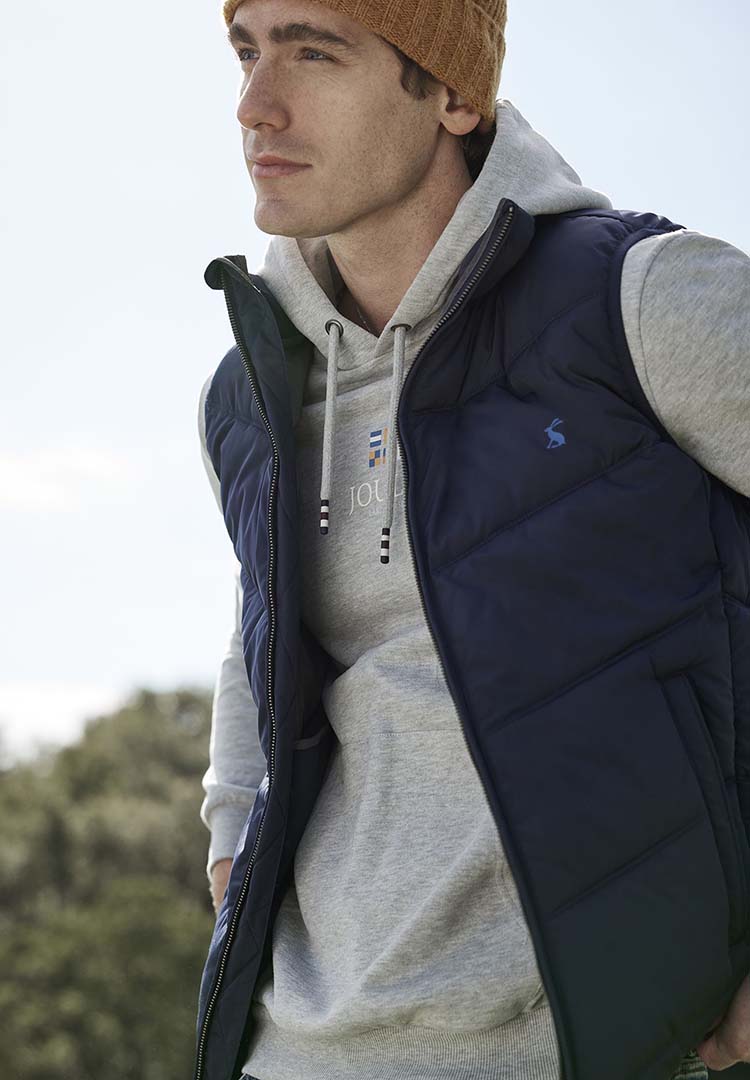 How to Dry a Gilet

Aside from line drying, Joules gilets can be put in the tumble dryer on a low heat. If you are line drying, just make sure you double check that the garment has fully dried before putting it back in your wardrobe. The last thing you’ll want is any nasty damp smells emanating from your clothes.

The History of the Gilet

A little fashion history for good measure. Perhaps unsurprisingly, the origin of the gilet can be traced back to 15th century France and the word ‘jerkin’. These were pieces of clothing that were often favoured by European peasants during this period.

When the 16th century kicked in, the jerkin was padded by the aristocracy, creating a more modern taken on the gilet that we all know and love today. Believe it or not, Henry VIII was a huge fan of the padded jerkin.

Almost a century later, the jerkin all but disappeared – only worn by land-workers to keep warm during their busy working days. The aristocracy in the meantime moved onto to the fitted waistcoat which during this period of history was an essential part of any gentleman’s fashion routine.

Because it’s sleeveless, a gilet layers perfectly without restricting movement. Add a gilet to the mix and you’ll get the warmth where it counts, without feeling hemmed in. So free your arms (and your spirit) and add a gilet to your wardrobe today. It’s a seasonless essential you won’t know how you lived without.